By: Mahmoud A. Emam

All the copyrights for the registered letter belong to the authors – This is not a published letter yet, the authors need to address the comments by the readers before the publication.

From the Old Kingdom (c. 2575–2150 BC) onwards, Punt was frequently recorded in Egyptian royal, private, religious and literary texts as a geographical region from which frankincense and other exotic products were imported as well as that mythical place from which marvelous things came to Egypt. Egypt relationship to Land of Punt is based on commercial interests. Such trading contacts are attested by commemorative stelae, tomb reliefs, and most notably by the reliefs in Queen Hatshepsut’s mortuary temple at Deir El-Bahri.

The location of Punt and its routes from Egypt have been debated for more than century, because these Egyptian textual and representational evidence only provides a general picture of Punt. Many different hypotheses have been advanced by Egyptologists to locate Punt in specific geographical regions. Arabia, Somalia, Mozambique, Sudan, Uganda, Ethiopia and Eritrea, all of these places and others have been suggested at one time or another. But recently a collection of additional archaeological, anthropological, geographical, botanical and zoological evidence assist in locating Punt on African coast in the northern Horn of Africa (i.e. northern Ethiopia and Eritrea; Fig. 1). However, in point of view, the geological evidence still pending. copyswiss.me

There are a lot of foreign materials had been discovered in this port including ship timbers, anchors, ropes, cargo boxes, administrative devices, ostraca, fragments of papyri, lithics, plant and animal remains and pottery (e.g. Ancient Ona ware, early Adulis ware from Eritrea, Gash Group ware and Nubian ware from the region of the 4th Cataract in Sudan, Malayba ware, and Sabir ware from Southern Arabia). In addition to raw materials, researchers found African ebony most likely from the northwestern slopes of the highlands in Eritrea, and obsidian (which did not analysed yet). 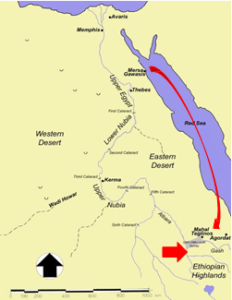 Obsidian is a natural volcanic glass of rhyolite composition (defined by a silica content of around 70% by weight). Due to its numerous qualities – physical and aesthetic – it is well known both as a luxury item and tool material throughout the prehistoric and historic world. Obsidian is the sharpest available raw material and is homogeneous in nature, making it easily workable and desirable as a tool of production. The ancient Egyptians used obsidian to inlay statue eyes, jewels, and amulets (Fig. 2). Geologically, there are no sources of obsidian in Egypt, while many obsidian sources documented on either side of the southern Red Sea (Fig. 3), near to the Land of Punt.

A geochemical homogeneity of each obsidian source allows obsidian to traceable back source at outcrop. That requires geochemical characterization of sources in order to establish the origins of obsidian artifacts. Chemical or mineralogical analysis samples of obsidian recently discovered from these Wadi Gawasis port will help the determine its geochemical characterization in order to locating these source region, by comparing the results with at numerous samples of obsidian collected and already analysed from both sides of southern Red Sea coasts, which will definitely shed new lights to find the location of the Land of Punt, or approve the current theory at least. www.fakewatches.cc 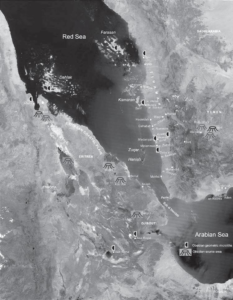