From 21 to 28 of July, 2018, more than 250 scientists from Africa and all over the world attended the27th Colloquium of African Geology (CAG27) and 17th Conference of the Geological Society of Africa (GSAf17) which were held at the University of Aveiro, Aveiro, Portugal.

This event was sponsored by the Universidade de Aveiro and the GeoBioTec Research Centre, under the auspices of the Geological Society of Africa. The event was an opportunity to continue the scientific exchanges between researchers from all over the world in the field of Geosciences, and to demonstrate the high scientific research standards that are being carried out over the world. The participants in the conference had the opportunity to share their expertise in a range of scientific fields, such as geology, geological resources, environmental risks, environment and human health, sustainable development, education, and tourism in Africa. 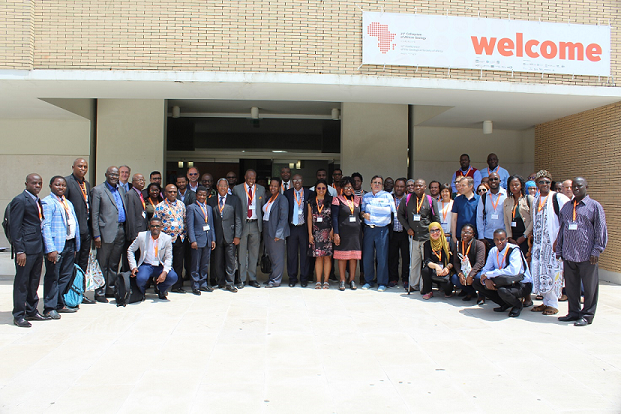 A group photo of the participation during the CAG27

The Scientific Committee compiled an interesting program of oral and poster presentations. The CAG27 local committee together with the Scientific Committee have compiled the accepted abstracts in the “Book of Abstracts” which was edited by Eduardo Ferreira da Silva, Carla A. Figueiredo Patinha, Nuno Durães, Carla Candeias; and published by UA Editora, Universidade de Aveiro, with ISBN 978-972-789-557-1.

In additional to the scientific program, the CAG27 hosted two days’ workshop under the title of “Kick-off workshop for the AU-AMREC working group”. The workshop was facilitated by the African Union Commission.

The Geological Society of Africa General Assembly was held on the Thursday of 25 July, 2018 as a part of the activities during the CAG27 and the GSAf17.